David has been a trustee of Fundays since 2002. He is a recently retired head teacher in Nottingham, where he worked for the last forty years. He has particular interest in activities for adults with learning disabilities.

Roger, former Chairman of FunDays is a semi – retired chartered accountant. He spent over twenty years with a Big Four accounting firm, the final 4 years as senior partner in the Nottingham Office. He has been involved with FunDays for 12 years with 8 years as Chairman. He is committed to working with all individuals and organisations who wish to improve the lives of those with physical disabilities, severe and profound learning disabilities and those with complex health and medical needs.

Laurence was a founding trustee of FunDays and its first Chairman.  He followed a banking career with appointments as a non-executive director of a number of public, private and governmental Boards, and was Chairman of Nottingham Building Society. He also is a past Chairman of St John Ambulance in Nottinghamshire. He has a continuing  interest in Charities that are local, particularly those that benefit young people with disabilities. The unfilled need to finance more activities for them, led to the establishment of FunDays.

For many years, Gerry was a volunteer adviser at Citizens Advise in Nottingham, a job she had to relinquish upon being appointed Vice Chairman of CAB. She then moved her voluntary work to Beeston CAB, in total she contributed 19 years to CAB. Also served as a Governor (and one time Chairman) of a Special Needs School, and later at Djanogly Academy as Governor for Special Needs students. For many decades, she has worked to aid the young, with special needs in our County.  She was the driving force in the creation of FunDays.

David is a semi-retired solicitor. He was a partner in a large international law firm for over 25 years, the last five of which he was senior partner of the Nottingham office. He has been a trustee of FunDays since 2015 and has a keen interest in education at all levels. He is Chairman of Governors of a large independent school, and a trustee of a number of charities.

Andrew was born in Durham but spent most of his life in the Nottingham area. A management accountant by qualification he retired in 2007 as Finance Director of Nottingham Building Society. Andrew became the treasurer of FunDays in Nottinghamshire at its inception in 2002.

Sandra has been involved in running businesses for several years. She also opened a business consultancy to help others to start and grow their own businesses which she did until her retirement some 6 years ago. She is still involved in her family business which is run from Watnall in Nottinghamshire. Sandra has been involved with local charities for some 40 years – concentrating on the wellbeing and support for elderly local residents and MS sufferers until she became a grandmother and wanted to get closer to a local charity supporting children – hence her trusteeship of FunDays which has been so very rewarding.

Beverley has worked in the voluntary sector for over 18 years. The last 10 years she has led Nottingham City’s Parent Carer Forum, a local charity that supports families with children with special educational needs and disabilities. She has ‘lived experience’ and her passion for ‘citizens’ voice’ to shape and influence the services they receive has developed over the last 20 years after volunteering in various roles including Chair for Educational Appeals and the Fire and Rescue Service Standards Committee; also as an independent member of both the Standards Committee and Overview and Scrutiny Board. She has been a trustee since 2013 and is committed to providing ‘ordinary’ opportunities and experiences such as FunDays.

Ed is the MD of Attenborough Dental & Medical, a family owned business formed over 100 years ago, and is President of ADDE (Association of Dental Dealers Europe). Ed lives in Nottingham with his family and has life long experience supporting those with disability.

Neil is the Development and IT Director for a leading Nottingham technology business with 25 years IT experience. Neil’s been involved with FunDays since 2017, with the primary remit of transforming the FunDays website with modernisation, additional functionality and information, to make it more informative and engaging for all.

Jane taught in special education from 1981. Recently retired as headteacher of a Nottinghamshire special school, Jane is currently serving as a Governor of another special school. Whilst a headteacher, the school was a recipient of many FunDays grants to support their summer schools and could see the benefits this had for pupils and their families. Young people were able to maintain skills, routines and friendships which were so important to their wellbeing. Jane recently joined the board of trustees of FunDays to help continue this work, so that more children and young people with learning difficulties across Nottinghamshire would be able to benefit from the support of FunDays. 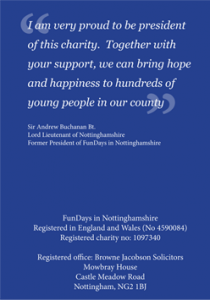